The purpose of Campaign Stages is to divide a larger Campaign into individually manageable segments, letting you group related emails and contact segments.

For example, you could email all your prospects in a first stage campaign, and then send another email as a second stage to just those who clicked through on the first stage.

Or, you could email all or some of your customers with an invite to a golf day, and then send further details to those that accepted, and finally a reminder the week before as a third stage.

You could also segment your database into customers, prospects and suspects, create a stage for each segment, send them slightly different newsletters and then see both the individual segments’ response rate as well as the consolidated numbers. 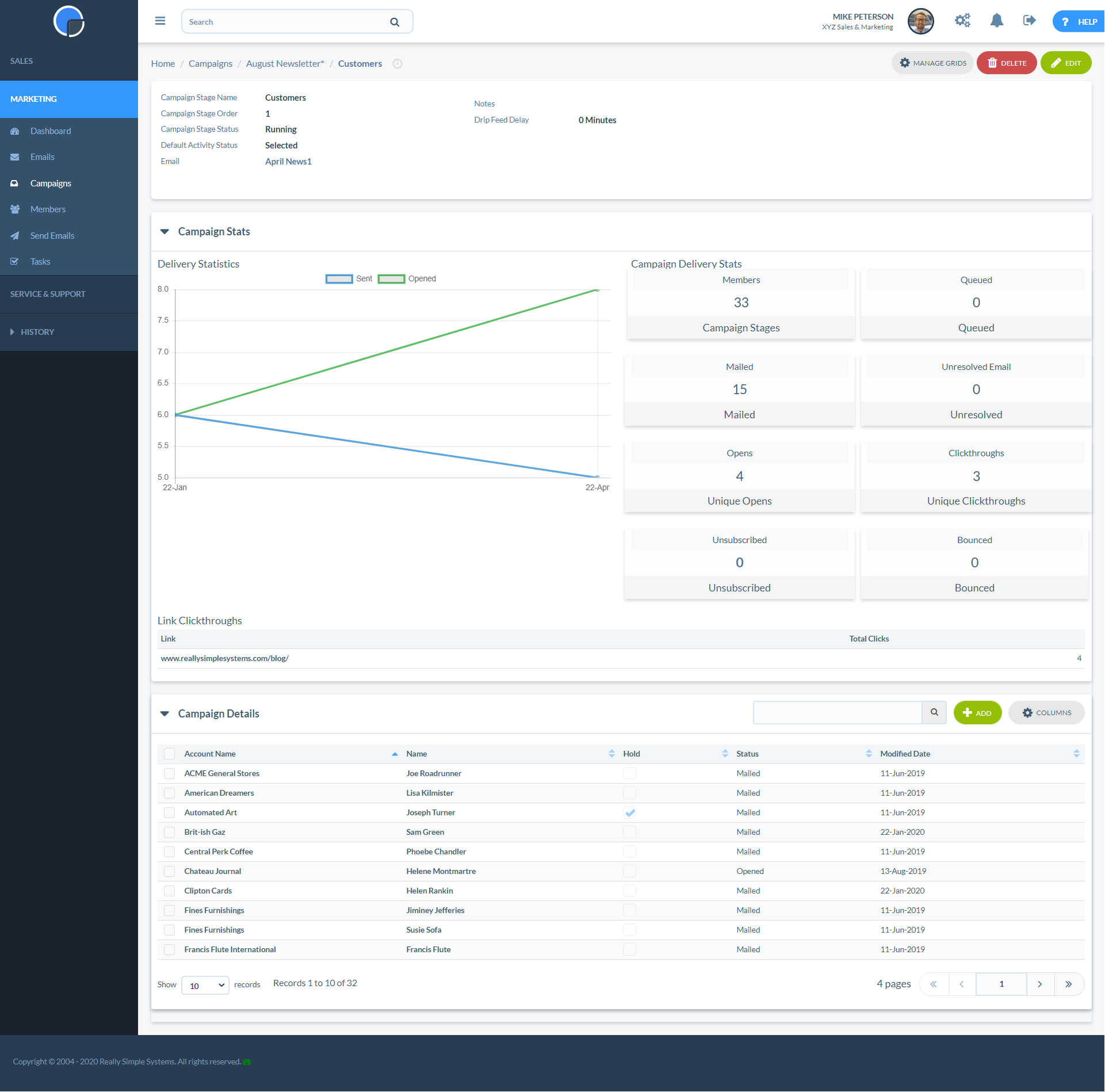 Let’s take a look at each of the fields on the Campaign Stages form:

The name that you want to call the Campaign Stage, such as “Initial Letter” or “Follow Up Call”.

The order that this Campaign Stage runs in the Campaign. Enter any alphanumeric such as “02”.

Use this box to describe if the Campaign Stage is Running, Planned or Completed. You can define what Campaign Status are available by the dropdown table CampaignStatus which can be accessed from Settings / System Settings/ Custom Dropdown Lists /CampaignStatus.

This is the Activity Status that new Members (your Contacts) are assigned when added to this Campaign Stage. This is normally “Selected”, and is driven by the CampaignActivity dropdown list.

If this is an email campaign, the name of the email that will be sent. Select the email you wish to send from the dropdown list.

If this is an email campaign and your are using Drip Marketing, enter the delay time, or Drip Feed Delay, of when you want the emails to be sent. For example, you might want the first email to sent immediately, so this would be set to 0, the second 30 minutes later, the third a day later and a final one a week later. The delay time is taken from the start of the campaign rather than the interval bewteen two stages. So a drip feed delay of one day will be sent one day after the first stage has been mailed, not one day after the previous stage’s.

If the Campaign Stage is an email, once the Campaign has been sent, the graphs and stats show the performance of the campaign stage.

Ticking the contact checkboxes in the Campaign Stage will display further options on the ‘More’ button. You can copy the contact or change the Campaign Status values. Select a new Campaign Status, and save. For example, if you are running a golf day and want to record acceptances, use this to change all those who have accepted your invitation to “Accepted”. 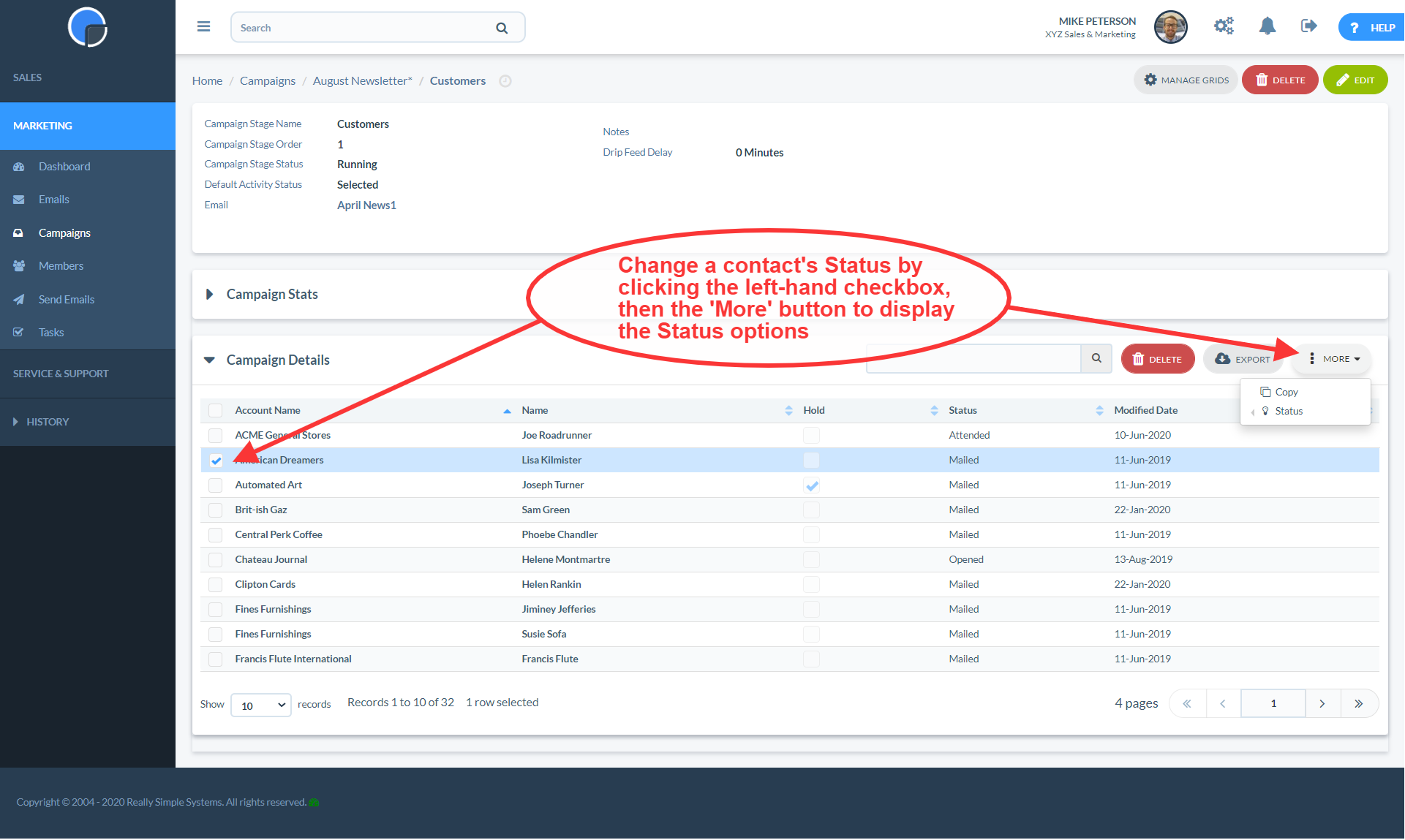 Give your Campaign Stage a Name and in the ‘Email’ box select the email you wish to send. If you have not yet created your email you can add this later.

You can then either just ‘Save’ the Campaign Stage or click ‘Save and Add Members’ to select the contacts you wish to mail.

Selecting Contacts for your Campaign Stage

Having created a new Campaign Stage you can select the contacts you wish to mail by using the ‘Save and Add Members’ button or, if you have already saved the stage, re-open it by clicking on the Campaign Stage name and clicking the Maintain Members button.

To add ALL the contacts from your CRM system, simply click the “+Add Contacts” button at the bottom of the page. You can also delete Members in the same way. 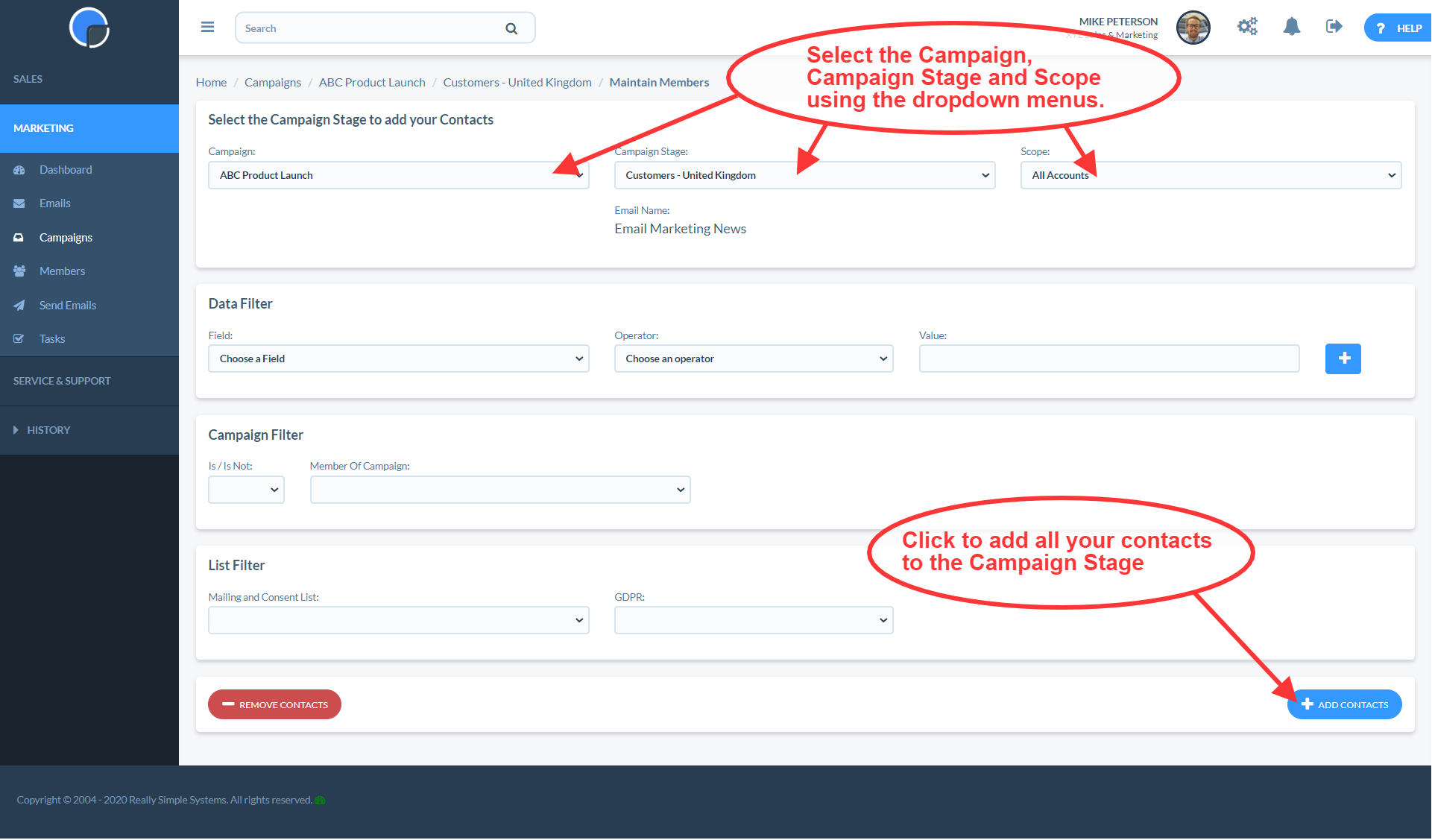 You can send your mailing to a more select group of customers or prospects by using the Data Filters option.

You can use all the data held in your CRM to drill-down your Member selection. Maybe you only want to mail contacts in a specific location or who have previously purchased a particular product. Or maybe you want to identify specific Account Types or contacts you have set up with a new custom field. 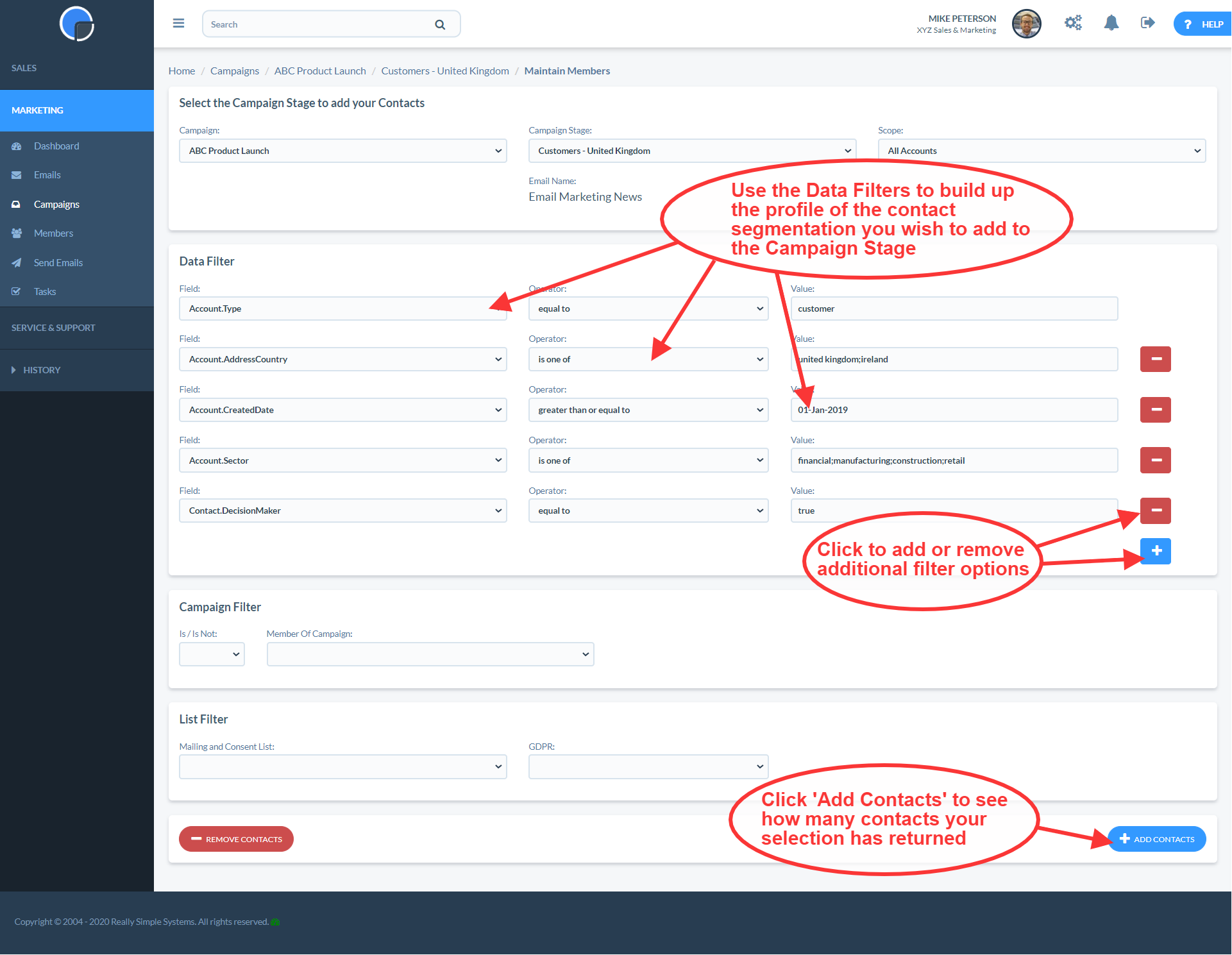 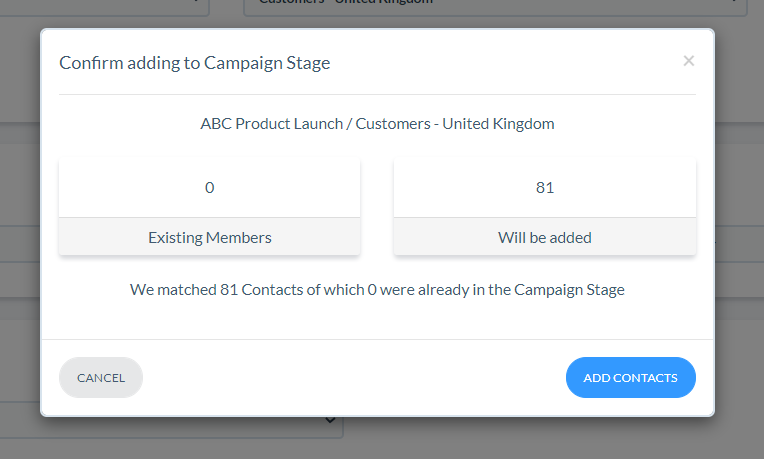 You can also select Members who are, or who are not, Members of another Campaign or Campaign Stage. You can select them as a whole or according to their ‘Status’ within that campaign, for example, if they Opened or Clicked Through in that campaign. 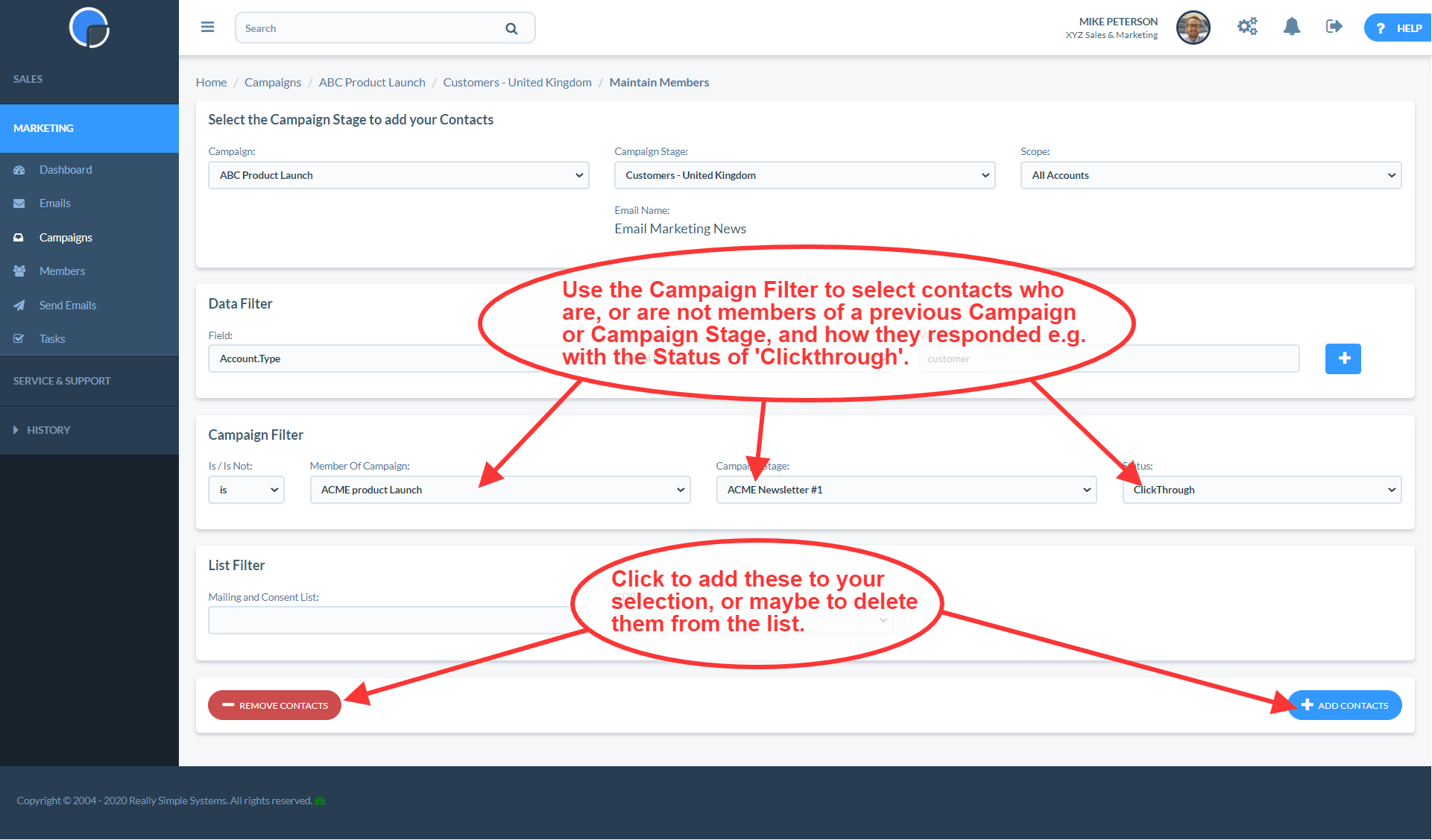 The List Filter option lets you select or deselect Contacts in your Mailing & Consent Lists, i.e. contacts who have given permission to receive your marketing messages, to comply with GDPR. Leaving the List Filter boxes blank will override any consent data and all contacts will be added to the Campaign Stage e.g. for mailings where consent is not applicable. 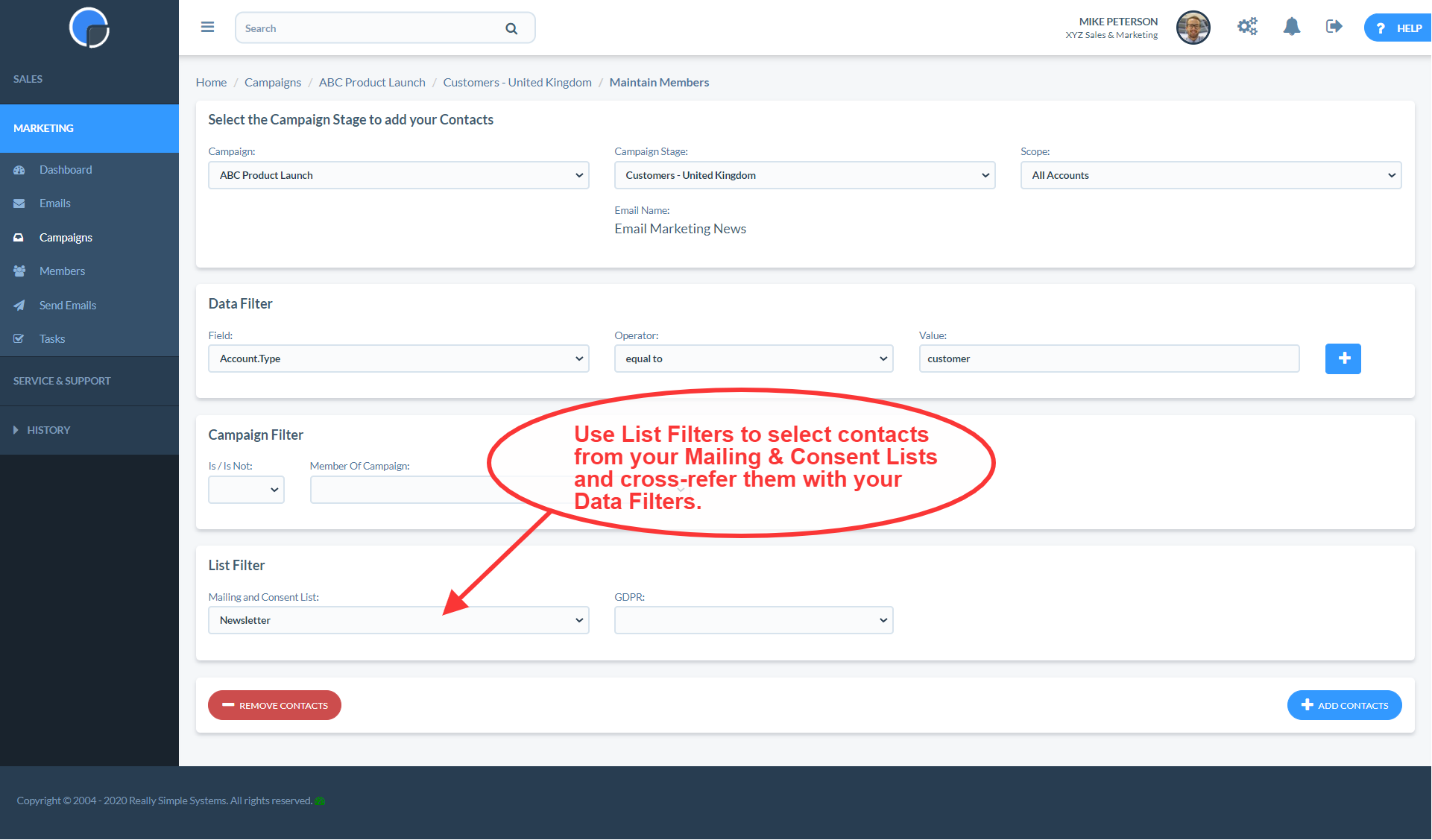 Once you have added some contacts (or members) to the Campaign, you can add more contacts by clicking the “+ Add” button. 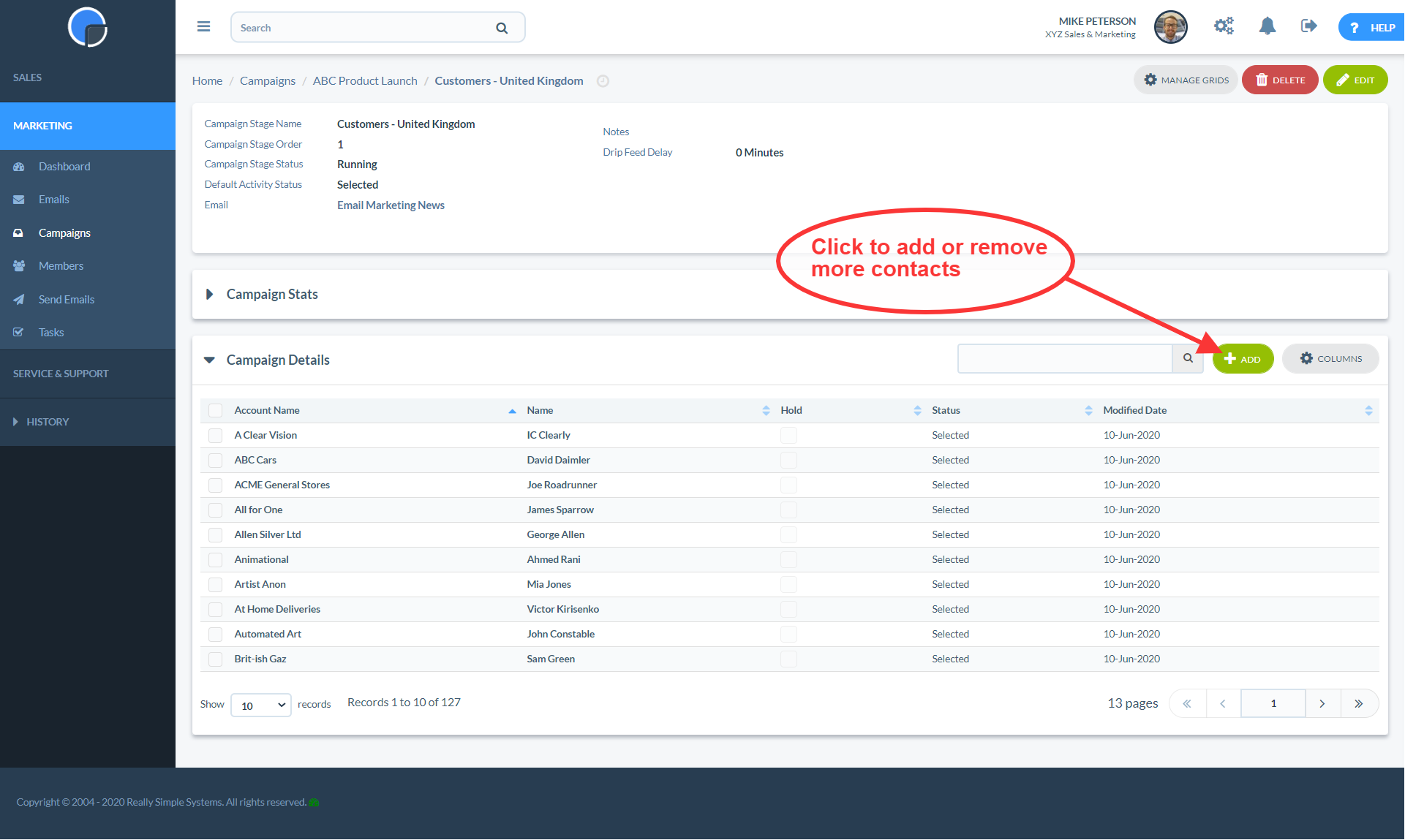 Deleting a Campaign Stage will delete the Activity Status of its Members.